Skip to content Skip to left sidebar Skip to footer

Attalla is a city in Etowah County, Alabama, that is part of the Gadsden Metropolitan Statistical Area. The city occupies the former site of a Native American village which was of considerable importance during the Creek War. It was here in Attalla, where David Brown, a Cherokee, assisted by the Rev. D. S. Butterbick, prepared the “Cherokee Spelling Book.” Attalla was founded in 1870 on land donated for the site of the town by W. C. Hammond, a plantation owner. It was incorporated as a city government on February 5, 1872, and was officially named “Attalla” in 1893 from the Cherokee language word meaning “my home.” Another accepted translation for Attalla is also “mountain.”

William P. Lay next to the original hydroelectric dam on Wills Creek paving the way for what would become Alabama Power.

Attalla has continued to have a rich history since its founding. The first hydroelectric plant for lighting an entire town was invented on a stream near Attalla by W. P. Lay in 1887. Attalla become the first town in American to be lighted with hydroelectric power, and it was this invention in Attalla that led to the creation of the Southern Company and Alabama Power (Dec. 6, 1906). For many years, Attalla further prospered with the growing boom of railroads going through the great town. In 1941 during World War II, the federal government constructed Camp Sibert with most of the camp lying within the city of Attalla. This site served as a training center for the Chemical Warfare Service of the Department of Defense until 1945.

Attalla is bordered to the east by the city of Gadsden and to the south by Rainbow City. Sitting in a prime location, the town features access to Interstate 59, Interstate 759, U.S. Highway 11, and U.S. Highways 431/278. The Northeast Alabama Regional Airport also sits close by. Attalla is currently home to Tigers for Tomorrow at Untamed Mountain, an exotic animal park and rescue preserve providing homes to confiscated and abandoned exotic animals. The U. S. Post Office building in Attalla, constructed in 1925, is listed on the National Register of Historic Places. If you are someone who likes a fine wine, you can also visit the Wills Creek Vineyards and Winery. 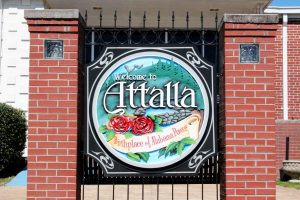 Our City of Attalla 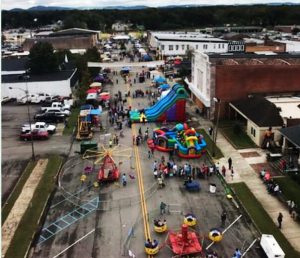